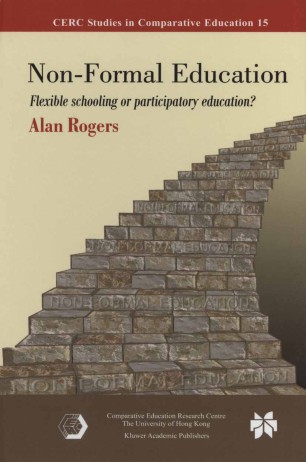 This is the first full study of non-formal education on an international scale since the 1980s. The book describes the emergence of the concept in the context of development and educational reform. It traces the debate about non-formal education from its origins in 1968 to the mid 1980s, and looks at the issues that this debate raised. It then describes a number of programmes in different parts of the world which call themselves ‘non-formal’, pointing out the wide range of different views about what is and what is not non-formal. Rogers asks whether we should drop the term altogether or try to reconceptualise it in terms of flexible schooling or participatory education.

This is an important new book by a well-established author. It deals with complex issues, but is written in a clear style. It contains an important new analysis of the development paradigms in which the controversies surrounding non-formal education grew up, and which shaped its purpose and impacts. The author’s call for a reformulation of the concept will find echoes not only in developing societies, but also in Western circles, where the language of non-formal education is being used increasingly within the context of lifelong learning. The book grew out of the teaching of non-formal education in which Professor Rogers has been engaged for the last 20 years. It is intended for teachers and students in comparative education courses in higher education institutions, and for researchers and others with an interest in the field.

Alan Rogers is an international expert in adult education and learning, with wide experience in Asia and Africa. He is the author of Teaching Adults, of Adults Learning for Development, and of What is the Difference? A new critique of adult learning and teaching. He was formerly Executive Director of Education for Development at the University of Reading, UK. He is currently Visiting Professor at the Universities of Nottingham and East Anglia, and Convener of Uppingham Seminars in Development.