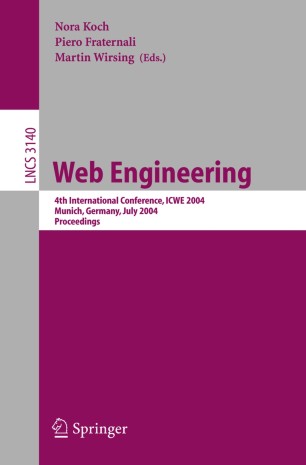 Web engineering is a new discipline that addresses the pressing need for syst- atic and tool-supported approaches for the development, maintenance and te- ing of Web applications. Web engineering builds upon well-known and succe- ful software engineering principles and practices, adapting them to the special characteristics of Web applications. Even more relevant is the enrichment with methods and techniques stemming from related areas like hypertext authoring, human-computer interaction, content management, and usability engineering. The goal of the 4th International Conference on Web Engineering (ICWE 2004), inlinewiththepreviousICWEconferences,wastoworktowardsabetterund- standing of the issues related to Web application development. Special attention was paid to emerging trends, technologies and future visions, to help the a- demic and industrial communities identify the most challenging tasks for their research and projects. Following a number of successful workshops on Web engineering since 1997 at well-known conferences, such as ICSE and WWW, the ?rst conference on Web engineering was held in C´ aceres, Spain in 2001. It was followed by ICWE 2002 in Santa Fe, Argentina and ICWE 2003 in Oviedo, Spain. In 2004 ICWE moved to the center of Europe and was held in Munich, Germany from July 26 to 30. ICWE 2004 was organized by the Institute for Informatics of the Ludwig- Maximilians-Universit¨ at (LMU) Munich. The ICWE 2004 edition received a total of 204 submissions, out of which 25 paperswereselectedbytheProgramCommitteeasfullpapers(12%acceptance).