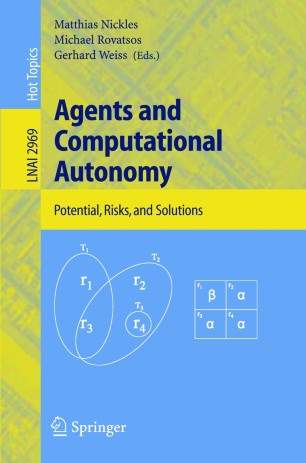 This volume contains the postproceedings of the 1st International Workshop on Computational Autonomy – Potential, Risks, Solutions (AUTONOMY 2003), held at the 2nd International Joint Conference on Autonomous Agents and Multi-agentSystems(AAMAS2003),July14,2003,Melbourne,Australia.Apart from revised versions of the accepted workshop papers, we have included invited contributions from leading experts in the ?eld. With this, the present volume represents the ?rst comprehensive survey of the state-of-the-art of research on autonomy, capturing di?erent theories of autonomy, perspectives on autonomy in di?erent kinds of agent-based systems, and practical approaches to dealing with agent autonomy. Agent orientation refers to a software development perspective that has evolved in the past 25 years in the ?elds of computational agents and multiagent systems. The basic notion underlying this perspective is that of a computational agent, that is, an entity whose behavior deserves to be called ?exible, social, and autonomous. As an autonomous entity, an agent possesses action choice and is at least to some extent capable of deciding and acting under self-control. Through its emphasis on autonomy, agent orientation signi?cantly di?ers from traditional engineering perspectives such as structure orientation or object o- entation. These perspectives are targeted on the development of systems whose behavior is fully determined and controlled by external units (e.g., by a p- grammer at design time and/or a user at run time), and thus inherently fail to capture the notion of autonomy.