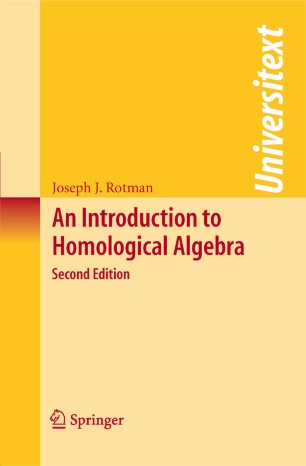 An Introduction to Homological Algebra

With a wealth of examples as well as abundant applications to Algebra, this is a must-read work: a clearly written, easy-to-follow guide to Homological Algebra.  The author provides a treatment of Homological Algebra which approaches the subject in terms of its origins in algebraic topology.  In this brand new edition the text has been fully updated and revised throughout and new material on sheaves and abelian categories has been added.

Applications include the following:

Joseph Rotman is Professor Emeritus of Mathematics at the University of Illinois at Urbana-Champaign. He is the author of numerous successful textbooks, including Advanced Modern Algebra (Prentice-Hall 2002), Galois Theory, 2nd Edition (Springer 1998) A First Course in Abstract Algebra (Prentice-Hall 1996), Introduction to the Theory of Groups, 4th Edition (Springer 1995), and Introduction to Algebraic Topology (Springer 1988).

"Joseph J. Rotman is a renowned textbook author in contemporary mathematics. Over the past four decades, he has published numerous successful texts of introductory character, mainly in the field of modern abstract algebra and its related disciplines. … Now, in the current second edition, the author has reworked the original text considerably.  While the first edition covered exclusively aspects of the homological algebra of groups, rings, and modules, that is, topics from its first period of development, the new edition includes some additional material from the second period, together with numerous other, more recent results from the homological algebra of groups, rings, and modules. The new edition has almost doubled in size and represents a substantial updating of the classic original. … All together, a popular classic has been turned into a new, much more topical and comprehensive textbook on homological algebra, with all the great features that once distinguished the original, very much to the belief [of its] new generation of readers." (Werner Kleinert, Zentralblatt)

"The new expanded second edition … attempts to cover more ground, basically going from the (concrete) category of modules over a given ring, as in the first edition, to an abelian category and to treat the important example of the category of sheaves on a topological space. … the exercise at the end of every section, plenty of examples and motivation for the many new concepts set this book apart and make it an ideal textbook for a course on the subject." (Felipe Zaldivar, MAA Online, December, 2008)