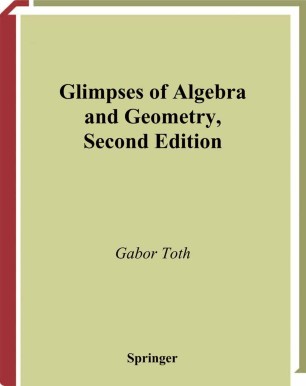 Glimpses of Algebra and Geometry

The purpose of Glimpses of Algebra and Geometry is to fill a gap between undergraduate and graduate mathematics studies. It is one of the few undergraduate texts to explore the subtle and sometimes puzzling connections between Number Theory, Classical Geometry and Modern Algebra in a clear and easily understandable style. Over 160 computer-generated images, accessible to readers via the World Wide Web, facilitate an understanding of mathematical concepts and proofs even further.
Glimpses also sheds light on some of the links between the first recorded intellectual attempts to solve ancient problems of Number Theory and Geometry and twentieth century mathematics. GLIMPSES will appeal to students who wish to learn modern mathematics, but have few prerequisite courses, and to high-school teachers who always had a keen interest in mathematics, but seldom the time to pursue background technicalities. Even postgraduate mathematicians will enjoy being able to browse through a number of mathematical disciplines in one sitting.
This new edition includes invaluable improvements throughout the text, including an in-depth treatment of root formulas, a detailed and complete classification of finite Möbius groups a la Klein, and a quick, direct, and modern approach to Felix Kleins "Normalformsatz," the main result of his spectacular theory of icosahedron and his solution of the irreducible quintic in terms of hypergeometric functions.
Gabor Toth is the Chair and Graduate Director of the Department of Mathematical Sciences at Rutgers University, Camden. His previous publications include Finite Mobius Groups, Spherical Minimal Immersions and Moduli (2001), Harmonic Maps and Minimal Immersion Through Representation Theory (1990) and Harmonic and Minimal Maps with Applications in Geometry and Physics (1984). Professor Toths main fields of interest involve the geometry of eigenmaps and spherical minimal immersions and the visualization of mathematics via computers.