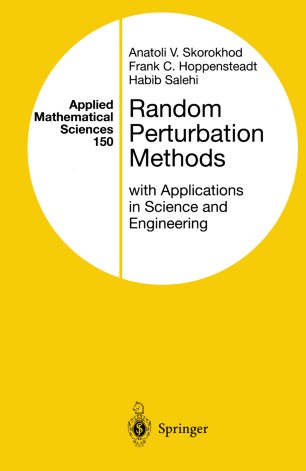 Random Perturbation Methods with Applications in Science and Engineering

As systems evolve, they are subjected to random operating environments. In addition, random errors occur in measurements of their outputs and in their design and fabrication where tolerances are not precisely met. This book develops methods for describing random dynamical systems, and it illustrates how the methods can be used in a variety of applications. The first half of the book concentrates on finding approximations to random processes using the methodologies of probability theory. The second half of the book derives approximations to solutions of various problems in mechanics, electronic circuits, population biology, and genetics. In each example, the underlying physical or biological phenomenon is described in terms of nonrandom models taken from the literature, and the impact of random noise on the solutions is investigated. The mathematical problems in these applicitons involve random pertubations of gradient systems, Hamiltonian systems, toroidal flows, Markov chains, difference equations, filters, and nonlinear renewal equations. The models are analyzed using the approximation methods described here and are visualized using MATLAB-based computer simulations.
This book will appeal to those researchers and graduate students in science and engineering who require tools to investigate stochastic systems.

"The authors introduce the reader to the mathematical theory of randomly perturbed dynamical systems. … the authors make the laudable attempt to introduce others, e.g. engineers and biologists (and non-expert mathematicians) … by starting the book with an Introduction that in less technical terms illustrates the main facts of the theory and how these facts help one better understand the dynamical systems considered by scientists and engineers. This, together with many computer-simulated visualizations, may make the book accessible to scientists and engineers … ." (Volker Wihstutz, Mathematical Reviews, 2003 m)

"This monograph contains a well-written rigorous mathematical treatment … and deals with modern concepts such as dynamical systems, stochastic processes, stability, Markov chains, population biology, etc. … In summary, this reviewer would definitely recommend Random Perturbation Methods with Applications in Science and Engineering to those researchers and graduate students … who require tools to investigate stochastic systems. The book qualifies to be a reference work that certainly would be a valuable addition in libraries of universities and laboratories pursuing research in Applied Mathematics." (VD Radulescu, Applied Mechanics Reviews, Vol. 56 (4), 2003)