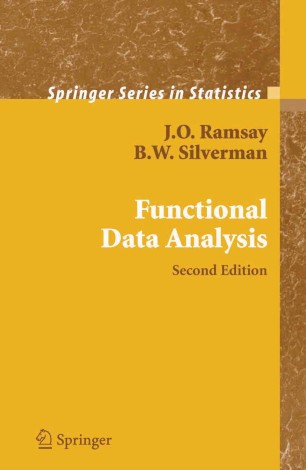 Scientists and others today often collect samples of curves and other functional observations. This monograph presents many ideas and techniques for such data.  Included are expressions in the functional domain of such classics as linear regression, principal components analysis, linear modeling, and canonical correlation analysis, as well as specifically functional techniques such as curve registration and principal differential analysis. Data arising in real applications are used throughout for both motivation and illustration, showing how functional approaches allow us to see new things, especially by exploiting the smoothness of the processes generating the data. The data sets exemplify the wide scope of functional data analysis; they are drawn from growth analysis, meteorology, biomechanics, equine science, economics, and medicine.

The book presents novel statistical technology, much of it based on the authors’ own research work, while keeping the mathematical level widely accessible. It is designed to appeal to students, to applied data analysts, and to experienced researchers; it will have value both within statistics and across a broad spectrum of other fields.

This second edition is aimed at a wider range of readers, and especially those who would like to apply these techniques to their research problems. It complements the authors' other recent volume Applied Functional Data Analysis: Methods and Case Studies. In particular, there is an extended coverage of data smoothing and other matters arising in the preliminaries to a functional data analysis. The chapters on the functional linear model and modeling of the dynamics of systems through the use of differential equations and principal differential analysis have been completely rewritten and extended to include new developments. Other chapters have been revised substantially, often to give more weight to examples and practical considerations.

Jim Ramsay is Professor of Psychology at McGill University and is an international authority on many aspects of multivariate analysis. He was President of the Statistical Society of Canada in 2002-3 and holds the Society’s Gold Medal for his work in functional data analysis.

Bernard Silverman is Master of St Peter’s College and Professor of Statistics at Oxford University. He was President of the Institute of Mathematical Statistics in 2000–1. He is a Fellow of the Royal Society. His main specialty is in computational statistics, and he is the author or editor of several highly regarded books in this area.