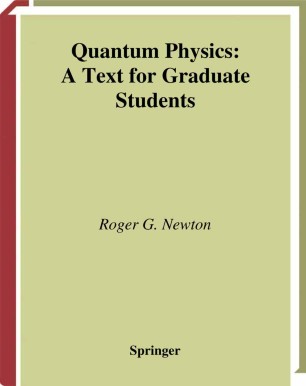 A Text for Graduate Students

The combination of quantum mechanics and quantum ?eld theory cons- tutesthemostrevolutionaryandin?uentialphysicaltheoryofthetwentieth century. Itsimpactisfeltnotonlyinalmostallothersciences,butthefruits of its application are ubiquitous in everyday life. This textbook is designed to teach graduate students the underlying quantum-physical ideas, their mathematical formulations, and the basic problem-solving techniques of the discipline. It assumes they have taken at least one introductory course in quantum mechanics as undergraduates and are familiar with the history of the subject and the basic experimental evidence that led to its adoption, as well as with many of its fundamental notions. In contrast to most other authors, I am therefore not introducing the quantum theory via an hist- ical survey of its early successes. Instead, following the models of books on classsical mechanics or electromagnetism, I develop the theory from its basic assumptions, beginning with statics, followed by the dynamics and details of its speci?c areas of use as well as the needed mathematical te- niques. Although this book, inevitably, deals largely with the behavior of point particles under various conditions, I do not regard particles as the fun- mental entities of the universe: the most basic object is the quantum ?eld, with theobserved particlesarising from the?eld asitsquanta. For thisr- son I introduce quantum ?elds right from the beginning and demonstrate, in the ?rst chapter, how particles originate.