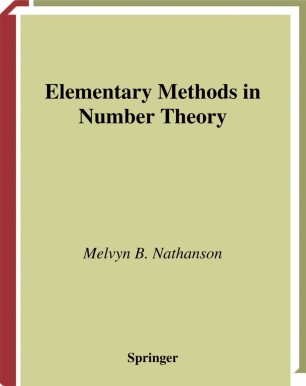 Elementary Methods in Number Theory begins with "a first course in number theory" for students with no previous knowledge of the subject. The main topics are divisibility, prime numbers, and congruences. There is also an introduction to Fourier analysis on finite abelian groups, and a discussion on the abc conjecture and its consequences in elementary number theory. In the second and third parts of the book, deep results in number theory are proved using only elementary methods. Part II is about multiplicative number theory, and includes two of the most famous results in mathematics: the Erdös-Selberg elementary proof of the prime number theorem, and Dirichlets theorem on primes in arithmetic progressions. Part III is an introduction to three classical topics in additive number theory: Warings problems for polynomials, Liouvilles method to determine the number of representations of an integer as the sum of an even number of squares, and the asymptotics of partition functions. Melvyn B. Nathanson is Professor of Mathematics at the City University of New York (Lehman College and the Graduate Center). He is the author of the two other graduate texts: Additive Number Theory: The Classical Bases and Additive Number Theory: Inverse Problems and the Geometry of Sumsets.