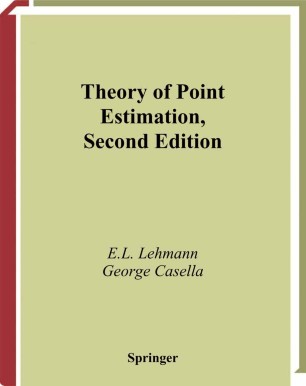 Since the publication in 1983 of Theory of Point Estimation, much new work has made it desirable to bring out a second edition. The inclusion of the new material has increased the length of the book from 500 to 600 pages; of the approximately 1000 references about 25% have appeared since 1983. The greatest change has been the addition to the sparse treatment of Bayesian inference in the first edition. This includes the addition of new sections on Equivariant, Hierarchical, and Empirical Bayes, and on their comparisons. Other major additions deal with new developments concerning the information in equality and simultaneous and shrinkage estimation. The Notes at the end of each chapter now provide not only bibliographic and historical material but also introductions to recent development in point estimation and other related topics which, for space reasons, it was not possible to include in the main text. The problem sections also have been greatly expanded. On the other hand, to save space most of the discussion in the first edition on robust estimation (in particu lar L, M, and R estimators) has been deleted. This topic is the subject of two excellent books by Hampel et al (1986) and Staudte and Sheather (1990). Other than subject matter changes, there have been some minor modifications in the presentation.