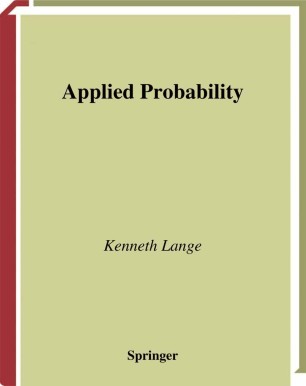 Despite the fears of university mathematics departments, mathematics educat,ion is growing rather than declining. But the truth of the matter is that the increases are occurring outside departments of mathematics. Engineers, computer scientists, physicists, chemists, economists, statis- cians, biologists, and even philosophers teach and learn a great deal of mathematics. The teaching is not always terribly rigorous, but it tends to be better motivated and better adapted to the needs of students. In my own experience teaching students of biostatistics and mathematical bi- ogy, I attempt to convey both the beauty and utility of probability. This is a tall order, partially because probability theory has its own vocabulary and habits of thought. The axiomatic presentation of advanced probability typically proceeds via measure theory. This approach has the advantage of rigor, but it inwitably misses most of the interesting applications, and many applied scientists rebel against the onslaught of technicalities. In the current book, I endeavor to achieve a balance between theory and app- cations in a rather short compass. While the combination of brevity apd balance sacrifices many of the proofs of a rigorous course, it is still cons- tent with supplying students with many of the relevant theoretical tools. In my opinion, it better to present the mathematical facts without proof rather than omit them altogether.