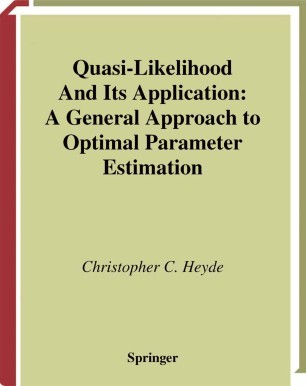 This book is concerned with the general theory of optimal estimation of - rameters in systems subject to random e?ects and with the application of this theory. The focus is on choice of families of estimating functions, rather than the estimators derived therefrom, and on optimization within these families. Only assumptions about means and covariances are required for an initial d- cussion. Nevertheless, the theory that is developed mimics that of maximum likelihood, at least to the ?rst order of asymptotics. The term quasi-likelihood has often had a narrow interpretation, asso- ated with its application to generalized linear model type contexts, while that of optimal estimating functions has embraced a broader concept. There is, however, no essential distinction between the underlying ideas and the term quasi-likelihood has herein been adopted as the general label. This emphasizes its role in extension of likelihood based theory. The idea throughout involves ?nding quasi-scores from families of estimating functions. Then, the qua- likelihood estimator is derived from the quasi-score by equating to zero and solving, just as the maximum likelihood estimator is derived from the like- hood score.