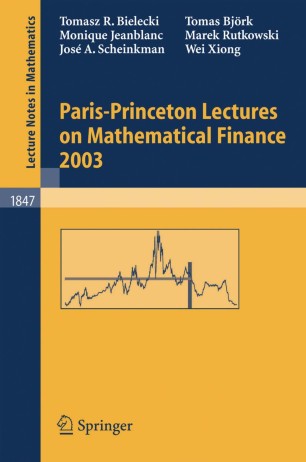 The Paris-Princeton Lectures in Financial Mathematics, of which this is the second volume, will, on an annual basis, publish cutting-edge research in self-contained, expository articles from outstanding - established or upcoming! - specialists. The aim is to produce a series of articles that can serve as an introductory reference for research in the field. It arises as a result of frequent exchanges between the finance and financial mathematics groups in Paris and Princeton. This volume presents the following articles: "Hedging of Defaultable Claims" by T. Bielecki, M. Jeanblanc, and M. Rutkowski; "On the Geometry of Interest Rate Models" by T. Björk;  "Heterogeneous Beliefs, Speculation and Trading in Financial Markets" by J.A. Scheinkman, and W. Xiong.