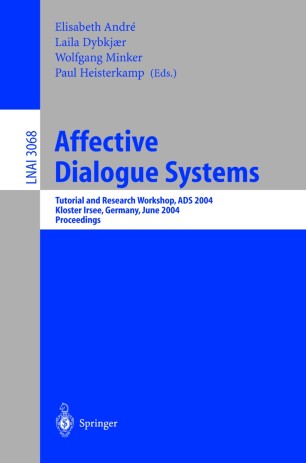 Human conversational partners are able, at least to a certain extent, to detect the speaker’s or listener’s emotional state and may attempt to respond to it accordingly. When instead one of the interlocutors is a computer a number of questions arise, such as the following: To what extent are dialogue systems able to simulate such behaviors? Can we learn the mechanisms of emotional be- viors from observing and analyzing the behavior of human speakers? How can emotionsbeautomaticallyrecognizedfromauser’smimics,gesturesandspeech? What possibilities does a dialogue system have to express emotions itself? And, very importantly, would emotional system behavior be desirable at all? Given the state of ongoing research into incorporating emotions in dialogue systems we found it timely to organize a Tutorial and Research Workshop on A?ectiveDialogueSystems(ADS2004)atKlosterIrseein GermanyduringJune 14–16, 2004. After two successful ISCA Tutorial and Research Workshops on Multimodal Dialogue Systems at the same location in 1999 and 2002, we felt that a workshop focusing on the role of a?ect in dialogue would be a valuable continuation of the workshop series. Due to its interdisciplinary nature, the workshop attracted submissions from researchers with very di?erent backgrounds and from many di?erent research areas, working on, for example, dialogue processing, speech recognition, speech synthesis, embodied conversational agents, computer graphics, animation, user modelling, tutoring systems, cognitive systems, and human-computer inter- tion.