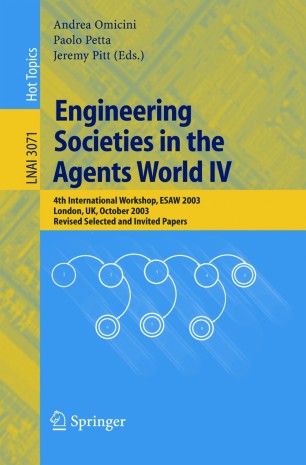 ESAW: International Workshop on Engineering Societies in the Agents World

The fourth internationalworkshop,“EngineeringSocietiesin the Agents World” (ESAW 2003) was a three-dayevent that took place at the end of October 2003. After previous events in Germany, the Czech Republic, and Spain, the workshop crossed the Channel, to be held at the premises of Imperial College, London. The steady increase in the variety of backgrounds of contributing sci- tists, fascinating new perspectives on the topics, and number of participants, bespeaks the success of the ESAW workshop series. Its idea was born in 1999 among members of the working group on “Communication, Coordination, and Collaboration” of the ?rst lease of life of the European Network of Excellence on Agent-Based Computing, AgentLink, out of a critical discussion about the general mindset of the agent community. At that time, we felt that proper c- siderationsofsystemicaspectsofagenttechnologydeployment,suchasackno- edgement of the importance of the social and environmental perspectives, were sorely missing: a de?ciency that we resolved should be addressed directly by a new forum.