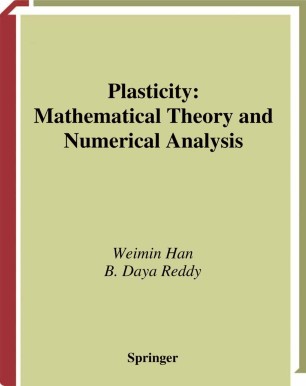 The theory of elastoplastic media is now a mature branch of solid and structural mechanics, having experienced significant development during the latter half of this century. This monograph focuses on theoretical aspects of the small-strain theory of hardening elastoplasticity. It is intended to provide a reasonably comprehensive and unified treatment of the mathematical theory and numerical analysis, exploiting in particular the great advantages to be gained by placing the theory in a convex analytic context. The book is divided into three parts. The first part provides a detailed introduction to plasticity, in which the mechanics of elastoplastic behavior is emphasized. The second part is taken up with mathematical analysis of the elastoplasticity problem. The third part is devoted to error analysis of various semi-discrete and fully discrete approximations for variational formulations of the elastoplasticity. The work is intended for a wide audience: this would include specialists in plasticity who wish to know more about the mathematical theory, as well as those with a background in the mathematical sciences who seek a self-contained account of the mechanics and mathematics of plasticity theory.