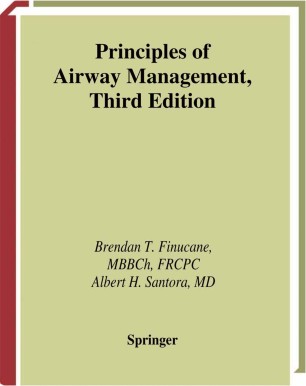 Any man’s death diminishes me, because I am involved in Mankind —John Donne 1 In 1988 Belhouse and Dore estimated that as many as 600 people died every year from complications of airway management in the developed world. The tragedy of this statistic was that most of these deaths were preventable. Inf- mation on airway-related topics has increased exponentially since we published the first edition of this book. In the past 10 years, almost 2000 English-language publications have been published on airway management, reflecting an increase in interest and change in this vitally important topic. We also have reason to - lieve that the number of deaths from airway mismanagement is declining at least 2 in North America (ASA Closed Claims Study). When we first conceived this book, our intended audience was medical s- dents. Then, we realized that other students and even seasoned practitioners of airway techniques might also benefit from it. In addition, trainees in anesthe- ology, respiratory therapy, nurse anesthesia, as well as interns and residents - volved in acute-care activity and emergency medicine technicians would also find much to learn. Thus, we published the second edition in 1996 with this - panded target audience in mind.