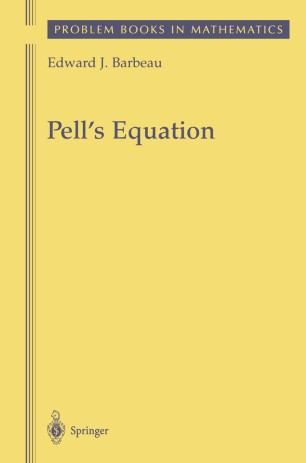 Pell's equation is an important topic of algebraic number theory that involves quadratic forms and the structure of rings of integers in algebraic number fields. The history of this equation is long and circuitous, and involved a number of different approaches before a definitive theory was found. There were partial patterns and quite effective methods of finding solutions, but a complete theory did not emerge until the end of the eighteenth century.

The topic is motivated and developed through sections of exercises which allow the student to recreate known theory and provide a focus for their algebraic practice. There are also several explorations that encourage the reader to embark on their own research. Some of these are numerical and often require the use of a calculator or computer. Others introduce relevant theory that can be followed up on elsewhere, or suggest problems that the reader may wish to pursue. A high school background in mathematics is all that is needed to get into this book, and teachers and others interested in mathematics who do not have a background in advanced mathematics may find that it is a suitable vehicle for keeping up an independent interest in the subject.

Edward Barbeau is Professor of Mathematics at the University of Toronto. He has published a number of books directed to students of mathematics and their teachers, including Polynomials (Springer 1989), Power Play (MAA 1997), Fallacies, Flaws and Flimflam (MAA 1999) and After Math (Wall & Emerson, Toronto 1995).