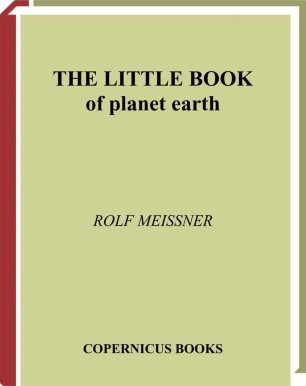 The Little Book of planet earth

Acknowledgments chapter 1 The Roots of Earth Sciences 1 Classical Scientific Thought 1 The Copernican Revolution 2 From Physics and Philosophy to Geology 4 The Age of the Earth 6 chapter 2 The Earth in the Context of Our Solar System 9 The Origins of the Solar System The Elements of the Solar System The Planets Circling the Sun chapter 3 The Formation of Earth and Moon 21 Similarities and Differences 21 Exploring the Moon chapter 4 The Interior of the Earth and the Role of Seismology Seismic Waves 28 The Earth’s Interior 36 chapter 5 Rotation and Shape, Gravity and Tides 41 Describing the Earth’s Shape Tides 44 Rotation 44 43 27 23 15 12 10 xiii xi chapter 6 The Earth’s Magnetic Field 47 Establishing a Physical Concept Reversals of the Magnetic Field 51 Paleomagnetism chapter 7 Atom—Mineral—Rock 59 Crystallization 60 Minerals in Crust and Mantle 60 Rocks chapter 8 The Early Ages 71 The Archean 71 The Proterozoic 77 chapter 9 Radioactive Dating The Chemistry of Unstable Elements Determining the Age Applications of Radioactive Dating Techniques Carbon Dating 90 chapter10 Plate Tectonics Twentieth-Century Research Gathering Evidence 95 Drifting Plates 3 Pangea and Beyond 4 chapter11 The Crust of the Earth 7 The Moho 7 The Crust Hydrocarbons 4 Coal 9 Other Subsurface-based Resources 9 12 12 12 108 10 10 10 10 94 93 89 83 81 81 63 52 48 chapter12 Formation of Mountains and Basins Collisions Orogeny Sediment Basins

|"[The Little Book of Planet Earth] provides critical insights into the nature of Earth's composition, our understanding of Earth's magnetic field, and plate tectonics." Science News

"How did life on our planet evolve? How old is Earth? How was our solar system formed and, with it, our planet? These are big questions, but the answers are found in this small book that gives broad insights into earth science." Science News

"An amazing introduction to what scientific research through the past centuries up to the modern day has learned about our planet." The Bookwatch

"The book is a small miracle." New Scientist

"The Little Book of Planet Earth describes the geological evolution of Earth from its formation. … In this concise and engaging little book, the author introduces lay readers to the key topics in modern earth and planetary science: the creation of Earth and its moon, the role of seismology in analyzing Earth’s structure, the formation of mountain ranges and basins, the significance of Earth’s magnetic field, and more." (Science in Africa, October, 2002)

"The Little Book of Planet Earth by meteorologist and geophysicist Rolf Meissner is an amazing introduction to what scientific research through the past centuries up to the modern day has learned about our planet. From the origin of the solar system to plate tectonics to earth’s magnetic field and much more, chapters teach all about the Earth in straightforward, easy-to-understand language accessible to lay readers. Highly recommended for all readers … ." (Circulation, June, 2002)

"This small but delightful book should interest anyone curious about the planet he or she lives on. … Meissner treats this material in an interesting and easy-to-read style. But he does much more – he also describes the formation of Earth and its development. … There are numerous illustrations and photographs throughout, along with a section on further reading. … Strongly recommended. General readers; lower- and upper-division undergraduates." (B. R. Parker, Choice, October, 2002)

"It is an up-to-date account of great breakthroughs in the earth sciences during the second half of the 20th century, that were published in top journals. … A very interesting work that satisfies one’s taste for understanding the basics of the science his professional occupation is based upon." (Michiel Dusar, Geologica Belgica, Vol. 5 (1-2), 2002)

"It’s a simple plan and excellently carried out, exploring early ideas about the origin of the Earth, then describing the Solar System and gradually narrowing the focus until reaching the core of the Earth itself. Meissner then retraces his path with fascinating explanations … . There are admirable illustrations, too. … the book is a small miracle." (Roy Herbert, New Scientist, May, 2002)