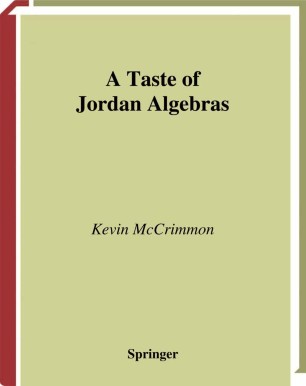 A Taste of Jordan Algebras

In this book, Kevin McCrimmon describes the history of Jordan Algebras and he describes in full mathematical detail the recent structure theory for Jordan algebras of arbitrary dimension due to Efim Zel'manov. To keep the exposition elementary, the structure theory is developed for linear Jordan algebras, though the modern quadratic methods are used throughout. Both the quadratic methods and the Zelmanov results go beyond the previous textbooks on Jordan theory, written in the 1960's and 1980's before the theory reached its final form.

This book is intended for graduate students and for individuals wishing to learn more about Jordan algebras. No previous knowledge is required beyond the standard first-year graduate algebra course. General students of algebra can profit from exposure to nonassociative algebras, and students or professional mathematicians working in areas such as Lie algebras, differential geometry, functional analysis, or exceptional groups and geometry can also profit from acquaintance with the material. Jordan algebras crop up in many surprising settings and can be applied to a variety of mathematical areas.

Kevin McCrimmon introduced the concept of a quadratic Jordan algebra and developed a structure theory of Jordan algebras over an arbitrary ring of scalars. He is a Professor of Mathematics at the University of Virginia and the author of more than 100 research papers.