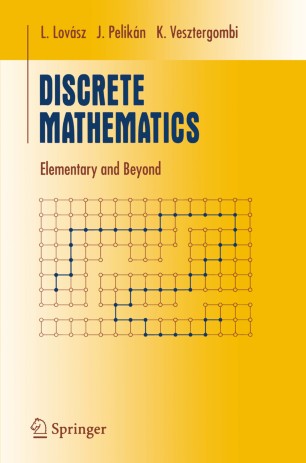 Discrete mathematics is quickly becoming one of the most important areas of mathematical research, with applications to cryptography, linear programming, coding theory and the theory of computing. This book is aimed at undergraduate mathematics and computer science students interested in developing a feeling for what mathematics is all about, where mathematics can be helpful, and what kinds of questions mathematicians work on. The authors discuss a number of selected results and methods of discrete mathematics, mostly from the areas of combinatorics and graph theory, with a little number theory, probability, and combinatorial geometry. Wherever possible, the authors use proofs and problem solving to help students understand the solutions to problems. In addition, there are numerous examples, figures and exercises spread throughout the book.

László Lovász is a Senior Researcher in the Theory Group at Microsoft Corporation. He is a recipient of the 1999 Wolf Prize and the Gödel Prize for the top paper in Computer Science. József Pelikán is Professor of Mathematics in the Department of Algebra and Number Theory at Eötvös Loránd University, Hungary. In 2002, he was elected Chairman of the Advisory Board of the International Mathematical Olympiad. Katalin Vesztergombi is Senior Lecturer in the Department of Mathematics at the University of Washington.