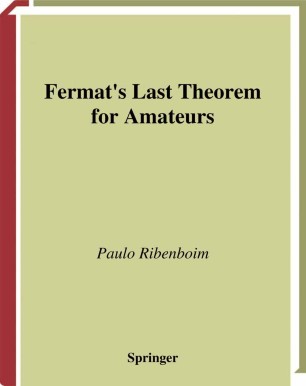 ItisnowwellknownthatFermat’slasttheoremhasbeenproved. For more than three and a half centuries, mathematicians — from the greatnamestothecleveramateurs—triedtoproveFermat’sfamous statement. The approach was new and involved very sophisticated theories. Finallythelong-soughtproofwasachieved. Thearithmetic theory of elliptic curves, modular forms, Galois representations, and their deformations, developed by many mathematicians, were the tools required to complete the di?cult proof. Linked with this great mathematical feat are the names of TANI- YAMA, SHIMURA, FREY, SERRE, RIBET, WILES, TAYLOR. Their contributions, as well as hints of the proof, are discussed in the Epilogue. This book has not been written with the purpose of presentingtheproofofFermat’stheorem. Onthecontrary, itiswr- ten for amateurs, teachers, and mathematicians curious about the unfolding of the subject. I employ exclusively elementary methods (except in the Epilogue). They have only led to partial solutions but their interest goes beyond Fermat’s problem. One cannot stop admiring the results obtained with these limited techniques. Nevertheless, I warn that as far as I can see — which in fact is not much — the methods presented here will not lead to a proof of Fermat’s last theorem for all exponents. vi Preface The presentation is self-contained and details are not spared, so the reading should be smooth. Most of the considerations involve ordinary rational numbers and only occasionally some algebraic (non-rational) numbers. For this reason I excluded Kummer’s important contributions, which are treated in detail in my book, Classical Theory of Algebraic N- bers and described in my 13 Lectures on Fermat’s Last Theorem (new printing, containing an Epilogue about recent results).