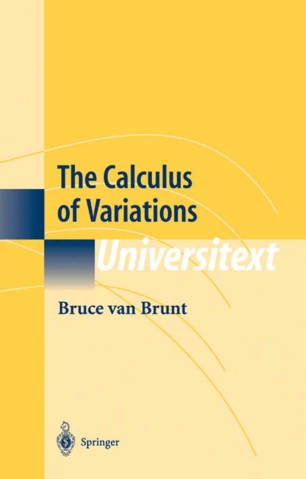 The Calculus of Variations

The calculus of variations has a long history of interaction with other branches of mathematics such as geometry and differential equations, and with physics, particularly mechanics. More recently, the calculus of variations has found applications in other fields such as economics and electrical engineering. Much of the mathematics underlying control theory, for instance, can be regarded as part of the calculus of variations.
This book is an introduction to the calculus of variations for mathematicians and scientists. The reader interested primarily in mathematics will find results of interest in geometry and differential equations. I have paused at times to develop the proofs of some of these results, and discuss briefly various topics not normally found in an introductory book on this subject such as the existence and uniqueness of solutions to boundary-value problems, the inverse problem, and Morse theory. I have made “passive use” of functional analysis (in particular normed vector spaces) to place certain results in context and reassure the mathematician that a suitable framework is available for a more rigorous study. For the reader interested mainly in techniques and applications of the calculus of variations, I leavened the book with numerous examples mostly from physics. In addition, topics such as Hamilton’s Principle, eigenvalue approximations, conservation laws, and nonholonomic constraints in mechanics are discussed. More importantly, the book is written on two levels. The technical details for many of the results can be skipped on the initial reading. The student can thus learn the main results in each chapter and return as needed to the proofs for a deeper understanding.