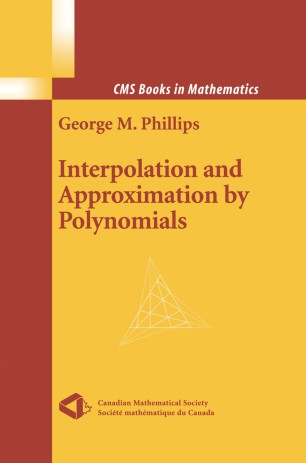 Interpolation and Approximation by Polynomials

This book covers the main topics concerned with interpolation and approximation by polynomials. This subject can be traced back to the precalculus era but has enjoyed most of its growth and development since the end of the nineteenth century and is still a lively and flourishing part of mathematics. In addition to coverage of univariate interpolation and approximation, the text includes material on multivariate interpolation and multivariate numerical integration, a generalization of the Bernstein polynomials that has not previously appeared in book form, and a greater coverage of Peano kernel theory than is found in most textbooks. There are many worked examples and each section ends with a number of carefully selected problems that extend the student's understanding of the text.

George Phillips has lectured and researched in mathematics at the University of St. Andrews, Scotland. His most recent book, Two Millenia of Mathematics: From Archimedes to Gauss (Springer 2000), received enthusiastic reviews in the USA, Britain and Canada. He is well known for his clarity of writing and his many contributions as a researcher in approximation theory.