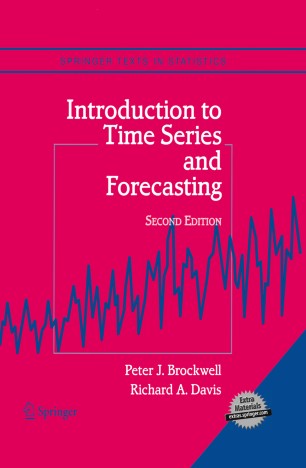 Introduction to Time Series and Forecasting

Some of the key mathematical results are stated without proof in order to make the underlying theory accessible to a wider audience. The book assumes a knowledge only of basic calculus, matrix algebra, and elementary statistics. The emphasis is on methods and the analysis of data sets. The logic and tools of model-building for stationary and nonstationary time series are developed in detail and numerous exercises, many of which make use of the included computer package, provide the reader with ample opportunity to develop skills in this area.
The core of the book covers stationary processes, ARMA and ARIMA processes, multivariate time series and state-space models, with an optional chapter on spectral analysis. Additional topics include harmonic regression, the Burg and Hannan-Rissanen algorithms, unit roots, regression with ARMA errors, structural models, the EM algorithm, generalized state-space models with applications to time series of count data, exponential smoothing, the Holt-Winters and ARAR forecasting algorithms, transfer function models and intervention analysis. Brief introductions are also given to cointegration and to nonlinear, continuous-time and long-memory models.
The time series package included in the back of the book is a slightly modified version of the package ITSM, published separately as ITSM for Windows, by Springer-Verlag, 1994. It does not handle such large data sets as ITSM for Windows, but like the latter, runs on IBM-PC compatible computers under either DOS or Windows (version 3.1 or later). The programs are all menu-driven so that the reader can immediately apply the techniques in the book to time series data, with a minimal investment of time in the computational and algorithmic aspects of the analysis.