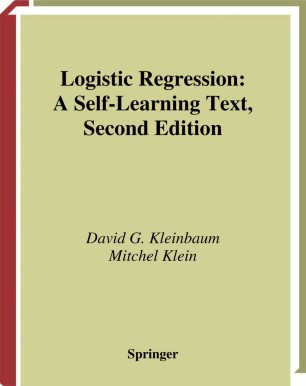 This is the second edition of this text on logistic regression methods, ori- nally published in 1994. As in the first edition, each chapter contains a presentation of its topic in “lecture-book” format together with objectives, an outline, key formulae, practice exercises, and a test. The “lecture-book” has a sequence of illust- tions and formulae in the left column of each page and a script (i.e., text) in the right column. This format allows you to read the script in conjunction with the illustrations and formulae that highlight the main points, formulae, or examples being presented. This second edition has expanded the first edition by adding five new ch- ters and a new appendix. The five new chapters are Chapter 9. Polytomous Logistic Regression Chapter 10. Ordinal Logistic Regression Chapter 11. Logistic Regression for Correlated Data: GEE Chapter 12. GEE Examples Chapter 13. Other Approaches for Analysis of Correlated Data Chapters 9 and 10 extend logistic regression to response variables that have more than two categories. Chapters 11–13 extend logistic regression to gen- alized estimating equations (GEE) and other methods for analyzing cor- lated response data. The appendix is titled “Computer Programs for Logistic Regression” and p- vides descriptions and examples of computer programs for carrying out the variety of logistic regression procedures described in the main text. The so- ware packages considered are SAS Version 8.0, SPSS Version 10.0, and STATA Version 7.0.