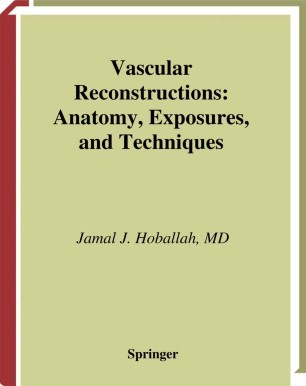 “Practice makes perfect,” and time spent in the operating room should be used most efficiently. In an attempt to comply with these two principles, I designed a vascular anastomoses workshop for our surgical residents at the University of Iowa. The workshop introduced the basic steps of constructing various vascular anastomoses in a relaxed environment outside the operating room. During the workshop, the residents expressed the need for a manual that outlines and - scribes the various vascular reconstructions in a step-by-step manner from beg- ning to end. Most textbooks usually include a picture of a vascular anastomosis during or after the completion of the reconstruction without detailing the beg- ning and conduct of the procedure. The usefulness of including sections that - dress commonly asked or unasked questions was also apparent. These questions pertain to vascular instruments, grafts, and sutures, as well as vascular anatomy and exposures. It is with these thoughts in mind that this book was conceived. This book is not intended to be a substitute for traditional atlases of specific v- cular procedures; rather, it was written to focus on the technical aspects of vas- lar reconstructions and to better prepare the surgical residents before they start their vascular rotation. This book is divided into four parts. The first part starts with a review of c- monly used vascular instruments and an overview of grafts and sutures used in vascular reconstructions.