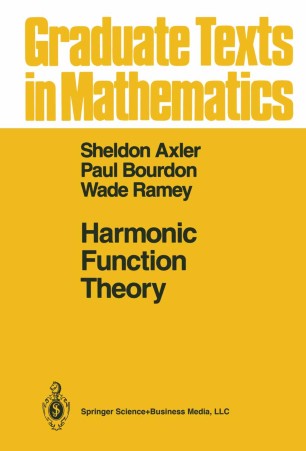 Harmonic functions - the solutions of Laplace's equation - play a crucial role in many areas of mathematics, physics, and engineering. Avoiding the disorganization and inconsistent notation of other expositions, the authors approach the field from a more function-theoretic perspective, emphasizing techniques and results that will seem natural to mathematicians comfortable with complex function theory and harmonic analysis; prerequisites for the book are a solid foundation in real and complex analysis together with some basic results from functional analysis. Topics covered include: basic properties of harmonic functions defined on subsets of Rn, including Poisson integrals; properties bounded functions and positive functions, including Liouville's and Cauchy's theorems; the Kelvin transform; Spherical harmonics; hp theory on the unit ball and on half-spaces; harmonic Bergman spaces; the decomposition theorem; Laurent expansions and classification of isolated singularities; and boundary behavior. An appendix describes routines for use with MATHEMATICA to manipulate some of the expressions that arise in the study of harmonic functions.