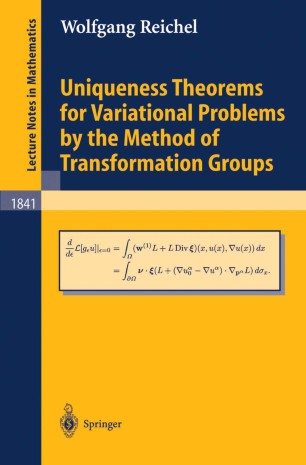 Uniqueness Theorems for Variational Problems by the Method of Transformation Groups

A classical problem in the calculus of variations is the investigation of critical points of functionals {\cal L} on normed spaces V. The present work addresses the question: Under what conditions on the functional {\cal L} and the underlying space V does {\cal L} have at most one critical point?

A sufficient condition for uniqueness is given: the presence of a "variational sub-symmetry", i.e., a one-parameter group G of transformations of V, which strictly reduces the values of {\cal L}. The "method of transformation groups" is applied to second-order elliptic boundary value problems on Riemannian manifolds. Further applications include problems of geometric analysis and elasticity.

Stays at other institutions:
October 1996 -- September 1998: postdoc at the Univ. of  Minnesota (USA) and Univ. of Cologne with DFG-grant
March,July, August 1999: visitor at the Univ. of Cardiff  (U.K) with EPSRC-grant

Awards: April 1997: "Klaus-Tschira Price for comprehensible science" awarded for the doctoral thesis by the Univ. of Karlsruhe