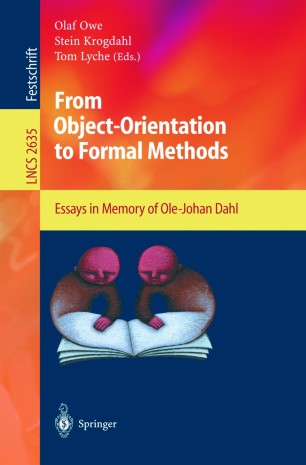 From Object-Orientation to Formal Methods

Essays in Memory of Ole-Johan Dahl

After Ole-Johan’s retirement at the beginning of the new millennium, some of us had thought and talked about making a “Festschrift” in his honor. When Donald Knuth took the initiative by sending us the ?rst contribution, the p- cess began to roll! In early 2002 an editing group was formed, including Kristen Nygaard, who had known Ole-Johan since their student days, and with whom he had developed the Simula language. Then we invited a number of prominent researchers familiar with Ole-Johan to submit contributions for a book hon- ing Ole-Johan on the occasion of his 70th birthday. Invitees included several members of the IFIP 2. 3 working group, a forum that Ole-Johan treasured and enjoyedparticipating in throughouthis career. In spite of the shortdeadline, the response to the invitations was overwhelmingly positive. The original idea was to complete the book rather quickly to make it a gift he could read and enjoy, because by then he had had cancer for three years, and his health was gradually deteriorating. Kristen had been regularly visiting Ole-Johan,who was in the hospitalat that time, and they were workingon their Turing award speech. Ole-Johan was grati?ed to hear about the contributions to this book, but modestly expressed the feeling that there was no special need to undertake a book project on his behalf. Peacefully accepting his destiny, Ole- Johan died on June 29, 2002.