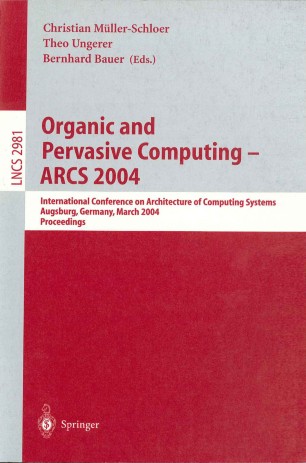 Where is system architecture heading? The special interest group on Computer and Systems Architecture (Fachausschuss Rechner- und Systemarchitektur) of the German computer and information technology associations GI and ITG a- ed this question and discussed it during two Future Workshops in 2002. The result in a nutshell: Everything will change but everything else will remain. Future systems technologies will build on a mature basis of silicon and IC technology,onwell-understoodprogramminglanguagesandsoftwareengineering techniques, and on well-established operating systems and middleware concepts. Newer and still exotic but exciting technologies like quantum computing and DNA processing are to be watched closely but they will not be mainstream in the next decade. Although there will be considerable progress in these basic technologies, is there any major trend which uni?es these diverse developments? There is a common denominator – according to the result of the two - ture Workshops – which marks a new quality. The challenge for future systems technologies lies in the mastering of complexity. Rigid and in?exible systems, built under a strict top-down regime, have reached the limits of manageable complexity, as has become obvious by the recent failure of several large-scale projects. Nature is the most complex system we know, and she has solved the problem somehow. We just haven’t understood exactly how nature does it. But it is clear that systems designed by nature, like an anthill or a beehive or a swarm of birds or a city, are di?erent from today’s technical systems that have beendesignedbyengineersandcomputerscientists.