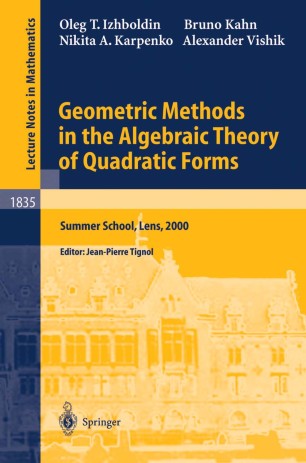 Geometric Methods in the Algebraic Theory of Quadratic Forms

The geometric approach to the algebraic theory of quadratic forms is the study of projective quadrics over arbitrary fields. Function fields of quadrics have been central to the proofs of fundamental results since the renewal of the theory by Pfister in the 1960's. Recently, more refined geometric tools have been brought to bear on this topic, such as Chow groups and motives, and have produced remarkable advances on a number of
outstanding problems. Several aspects of these new methods are addressed in this volume, which includes

- an introduction to motives of quadrics by Alexander Vishik, with various applications, notably to the splitting patterns of quadratic forms under base field extensions;
- papers by Oleg Izhboldin and Nikita Karpenko on Chow groups of quadrics and their stable birational equivalence, with application to the construction of fields which carry anisotropic quadratic forms of dimension 9, but none of higher dimension;
- a contribution in French by Bruno Kahn which lays out a general framework for the computation of the unramified cohomology groups of quadrics and other cellular varieties.

Most of the material appears here for the first time in print. The intended audience consists of research mathematicians at the graduate or post-graduate level.