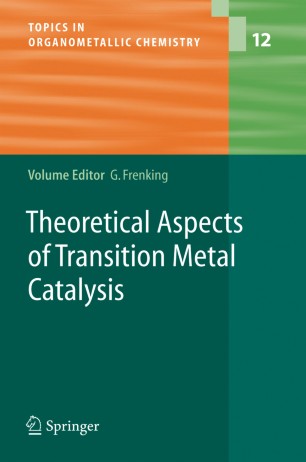 Transition metal catalysis belongs to the most important chemical research areas because a ubiquitous number of chemical reactions are catalyzed by transition metal compounds. Many efforts are being made by industry and academia to find new and more efficient catalysts for chemical processes. Transition metals play a prominent role in catalytic research because they have been proven to show an enormous diversity in lowering the activation barrier for chemical reactions. For many years, the search for new catalysts was carried out by trial and error, which was costly and time consuming. The understanding of the mechanism of the catalytic process is often not very advanced because it is difficult to study the elementary steps of the catalysis with experimental techniques. The development of modern quantum chemical methods for calculating possible intermediates and transition states was a breakthrough in gaining an understanding of the reaction pathways of transition metal catalyzed reactions. This volume, organized into eight chapters written by leading scientists in the field, illustrates the progress made during the last decade. The reader will obtain a deep insight into the present state of quantum chemical research in transition metal catalysis.