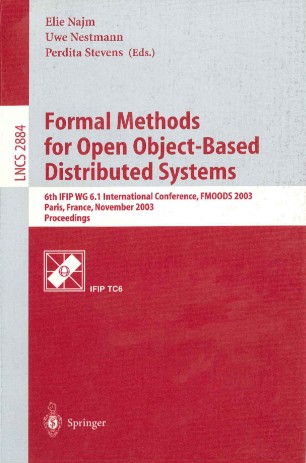 This volume contains the proceedings of FMOODS 2003, the 6th IFIP WG 6. 1 International Conference on Formal Methods for Open Object-Based Distributed Systems. The conference was held in Paris, France on November 19–21, 2003. The event was the sixth meeting of this conference series, which is held roughly every year and a half, the earlier events having been held in Paris, Canterbury, Florence, Stanford, and Twente. ThegoaloftheFMOODSseriesofconferencesistobringtogetherresearchers whose work encompasses three important and related ?elds: – formal methods; – distributed systems; – object-based technology. Such a convergence is representative of recent advances in the ?eld of distributed systems,andprovideslinksbetweenseveralscienti?candtechnologicalcommu- ties, as represented by the conferences FORTE/PSTV, CONCUR, and ECOOP. The objective of FMOODS is to provide an integrated forum for the p- sentation of research in the above-mentioned ?elds, and the exchange of ideas and experiences in the topics concerned with the formal methods support for open object-based distributed systems. For the call for papers, aspects of int- est of the considered systems included, but were not limited to: formal models; formal techniques for speci?cation, design or analysis; component-based design; veri?cation, testing and validation; semantics of programming, coordination, or modeling languages; type systems for programming, coordination or modelling languages; behavioral typing; multiple viewpoint modelling and consistency - tween di?erent models; transformations of models; integration of quality of s- vice requirements into formal models; formal models for security; and appli- tions and experience, carefully described.