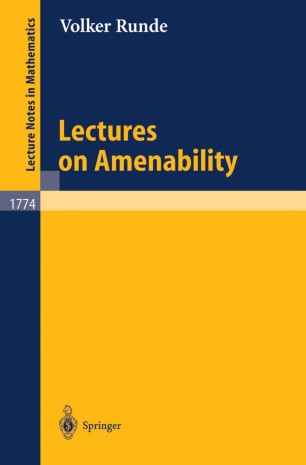 The notion of amenability has its origins in the beginnings of modern measure theory: Does a finitely additive set function exist which is invariant under a certain group action? Since the 1940s, amenability has become an important concept in abstract harmonic analysis (or rather, more generally, in the theory of semitopological semigroups). In 1972, B.E. Johnson showed that the amenability of a locally compact group G can be characterized in terms of the Hochschild cohomology of its group algebra L^1(G): this initiated the theory of amenable Banach algebras. Since then, amenability has penetrated other branches of mathematics, such as von Neumann algebras, operator spaces, and even differential geometry. Lectures on Amenability introduces second year graduate students to this fascinating area of modern mathematics and leads them to a level from where they can go on to read original papers on the subject. Numerous exercises are interspersed in the text.