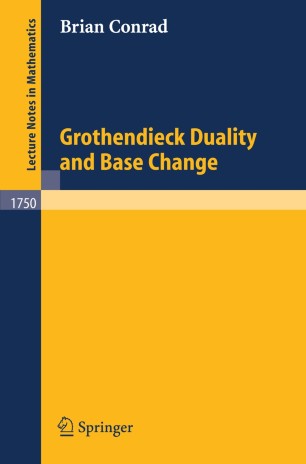 Grothendieck Duality and Base Change

Grothendieck's duality theory for coherent cohomology is a fundamental tool in algebraic geometry and number theory, in areas ranging from the moduli of curves to the arithmetic theory of modular forms. Presented is a systematic overview of the entire theory, including many basic definitions and a detailed study of duality on curves, dualizing sheaves, and Grothendieck's residue symbol. Along the way proofs are given of some widely used foundational results which are not proven in existing treatments of the subject, such as the general base change compatibility of the trace map for proper Cohen-Macaulay morphisms (e.g., semistable curves). This should be of interest to mathematicians who have some familiarity with Grothendieck's work and wish to understand the details of this theory.