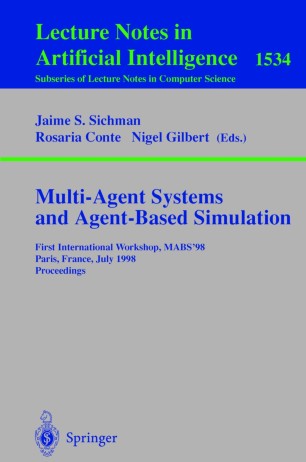 Fifteen papers were presented at the first workshop on Multi-Agent Systems and Agent-Based Simulation held as part of the Agents World conference in Paris, July 4-- 6, 1998. The workshop was designed to bring together two developing communities: the multi-agent systems researchers who were the core participants at Agents World, and social scientists interested in using MAS as a research tool. Most of the social sciences were represented, with contributions touching on sociology, management science, economics, psychology, environmental science, ecology, and linguistics. The workshop was organised in association with SimSoc, an informal group of social scientists who have arranged an irregular series of influential workshops on using simulation in the social sciences beginning in 1992. While the papers were quite heterogeneous in substantive domain and in their disciplinary origins, there were several themes which recurred during the workshop. One of these was considered in more depth in a round table discussion led by Jim Doran at the end of the workshop on 'Representing cognition for social simulation', which addressed the issue of whether and how cognition should be modelled. Quite divergent views were expressed, with some participants denying that individual cognition needed to be modelled at all, and others arguing that cognition must be at the centre of social simulation.