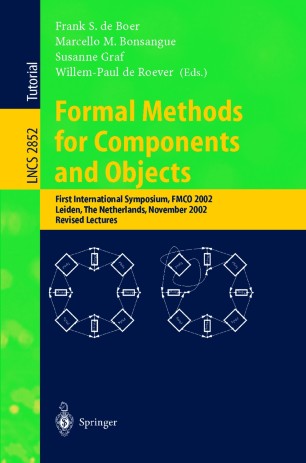 Largeandcomplexsoftwaresystemsprovidethenecessaryinfrastuctureinall- dustries today. In order to construct such large systems in a systematic manner, the focus in the development methodologies has switched in the last two decades from functional issues to structural issues: both data and functions are enc- sulated into software units that are integrated into large systems by means of various techniques supporting reusability and modi?ability. This encapsulation principleisessentialtoboththeobject-orientedandthemorerecentcompone- based sofware engineering paradigms. Formalmethodshavebeenappliedsuccessfullytotheveri?cationofmedi- sized programs in protocol and hardware design. However, their application to large systems requires the further development of speci?cation and veri?cation techniques supporting the concepts of reusability and modi?ability. In order to bring together researchers and practioners in the areas of so- ware engineering and formal methods, we organized the 1st International S- posium on Formal Methods for Components and Objects (FMCO) in Leiden, The Netherlands, November 5–8, 2002. The program consisted of invited tu- rials and more technical presentations given by leading experts in the ?elds of Theoretical Computer Science and Software Engineering. The symposium was attended by more than 100 people. This volume contains the contributions of the invited speakers to FMCO 2002. We believe that the presented material provides a unique combination of ideas on software engineering and formal methods which we hope will be an inspiration for those aiming at further bridging the gap between the theory and practice of software engineering.