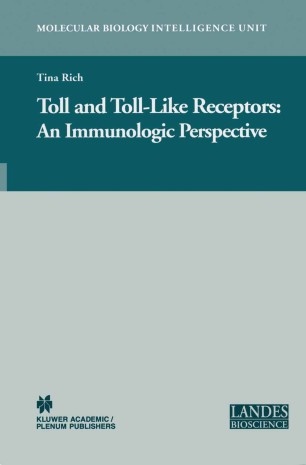 Toll Receptors and the Renaissance of Innate Immunity Elizabeth H. Bassett and Tina Rich Overview n the last few pages of Immunology: The Science of Self-Nonself Discrimination Jan Klein ponders on what he would study if he were to start over in the lab. ^ Dismissing the I antibody, MHC, the T-cell and parasitology, he considers instead the phylogeny of immune reactions, particularly in ancient phyla. As for a favored cell he chooses the macrophage. Describ­ ing it as a ^^MddchenfUr alles," (all purpose kitchen maid) Klein believed that this immunocyte still had secrets to reveal. Toll-Like Receptor (TLR) biology would prove to be one of these secrets. Analyses of the evolution of these receptors (Tolls and TLRs) have also helped us to rethink immune system phylogeny. In the first part of this chapter the history of the discovery of Toll and TLR biology is described. The evolution of the TLR genes and theories of immune function are covered in later sections. The remainder of this book presents work from nine groups active in the field. In the first chapter, "The Function of Toll-Like Receptors", Zlatko Dembic sets the stage by introducing us to many of the components of the immune system and their relationships vis a vis Toll receptors. Zlatko finishes his chapter with a discussion about current immune system models and contributes his own 'integrity model'. Work from the laboratory of Nicholas Gay follows this in "Structures and Motifs Involved in Toll Signaling".