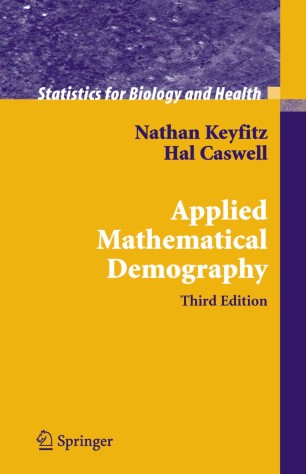 The third edition of this classic text maintains its focus on applications of demographic models, while extending its scope to matrix models for stage-classified populations. The authors first introduce the life table to describe age-specific mortality, and then use it to develop theory for stable populations and the rate of population increase. This theory is then revisited in the context of matrix models, for stage-classified as well as age-classified populations. Reproductive value and the stable equivalent population are introduced in both contexts, and Markov chain methods are presented to describe the movement of individuals through the life cycle. Applications of mathematical demography to population projection and forecasting, kinship, microdemography, heterogeneity, and multi-state models are considered.

The new edition maintains and extends the book’s focus on the consequences of changes in the vital rates. Methods are presented for calculating the sensitivity and elasticity of population growth rate, life expectancy, stable stage distribution, and reproductive value, and for applying those results in comparative studies.

Nathan Keyfitz is Professor Emeritus of Sociology at Harvard University. After holding positions at Canada’s Dominion Bureau of Statistics, the University of Chicago, and the University of California at Berkeley, he became Andelot Professor of Sociology and Demography at Harvard in 1972. After retiring from Harvard, he became Director of the Population Program at the International Institute for Applied Systems Analysis (IIASA) in Vienna from 1983 to 1993. Keyfitz is a member of the U.S. National Academy of Sciences and the Royal Society of Canada, and a Fellow of the American Academy of Arts and Sciences. He has received the Mindel Sheps Award of the Population Association of America and the Lazarsfeld Award of the American Sociological Association, and was the 1997 Laureate of the International Union for the Scientific Study of Population. He has written 12 books, including Introduction to the Mathematics of Population (1968) and, with Fr. Wilhelm Flieger, SVD, World Population Growth and Aging: Demographic Trends in the Late Twentieth Century (1990).

Hal Caswell is a Senior Scientist in the Biology Department of the Woods Hole Oceanographic Institution, where he holds the Robert W. Morse Chair for Excellence in Oceanography. He is a Fellow of the American Academy of Arts and Sciences. He has held a Maclaurin Fellowship from the New Zealand Institute of Mathematics and its Applications and a John Simon Guggenheim Memorial Fellowship. His research focuses on mathematical population ecology with applications in conservation biology. He is the author of Matrix Population Models: Construction, Analysis, and Interpretation (2001).

"If you found the original editions...to be excellent (and who amoung us has not?) then you will find the new edition to be equally so...This book is highly and unreservedly recommended for any beginning mathematical demographer." Mathematical Population Studies, 12:223-228, 2005

"The material in the second edition is retained, although the chapters are reorganized and references are updated. New chapters focusing on matrix population models are seamlessly interwoven with the second edition chapters, resulting in a thorough and comprehensive treatment of human, animal, and nonhuman demography." Journal of the American Statistical Association, December 2005

"The extension from the preceding editions does illustrate well, how demography in general has branched from plain presentations of human life tables into three directions … . The reviewer strongly recommends the book … . demography never has been as important as today. This presentation of techniques (e.g. simple integrations, statistics, straightforward calculation) is essentially simple and powerful and simultaneously well accessible to economists and political scientists. By this book the reader will understand the force of demographic facts and ideas." (Götz Uebe, Allgemeines Statistisches Archiv, Vol. 89, 2005)

"The present one is considerably enriched by the contribution of the second author, who is a demographer of plants and nonhuman animals. … the book is of interest not only to demographers, but to any scholar interested in biology. The book is organized in 20 chapters, a Bibliography of almost 700 entries and an index." (Solomon Marcus, Zentralblatt MATH, Vol. 1104 (6), 2007)