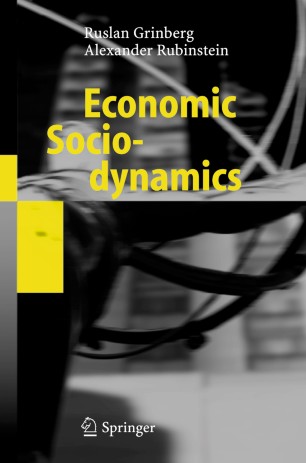 Grinberg and Rubinstein have written a profound treatment of one of the persistent mysteries of pure economics: how best to treat the "common good" or "social interest." Their discussion of the role of "passionaries" who incorporate the vision of a society`s future is brilliant, deeply rooted in Russia`s recent experience, and it provides a test of civilization and democracy which not very many nations in today`s world would pass.

A groundbreaking study of rational principles for the modern state to follow in promoting economic and social progress. Explains why more thoughtful and well meaning government intervention is a must today, not irrational passivity. Highly sophisticated but exceedingly pleasant reading.

Professors Grinberg and Rubinstein have presented, in their new book, a revolutionary approach to economic theory that they call "economic sociodynamics." Their "third way" represents both an extension of received economic theory and a challenge to it in its conception of the individual and the state. They question the reliance on individualism in current theory and creatively treat the state as an independent player in a market economy, exploring the implications of such an approach. In fact, this new theory has many important implications in a variety of areas. This is a provocative book that deserves serious consideration and appreciation.

I have read the manuscript with great interest and appreciation. The authors offer a sweeping discussion, beginning with my early travails with the merit good concept and its development over the years, and moving on to a wide range of related contributions, and the derivation of their own interpretation. I trust the volume will rekindle and extend this discussion, and for this I am indebted to both authors.

The complex structures of the globalized world, which limit the scope to maneuver for economic and politic actors while simultaneously increasing the need for meaningful action, raise the demand for new theoretical concepts. Grinberg`s and Rubinstein`s "Economic Sociodynamics" offer an inspiring alternative to traditional theories, proved in the past but insufficient in a world full of new challenges.

In this ambitious book the authors challenge mainstream economic theory by reconsidering the principle of individualism as its foundation. They refer to that version which fails to recognize the existence of the interests of society as such, and does thus exclude the role of the state as an independent market player seeking to realize these interests. The outcome is a new theoretical concept called "Economic Sociodynamics". The book reveals in detail the said concept, in particular its key notions of the sociodynamic multiplier and the rational behavior of the state.