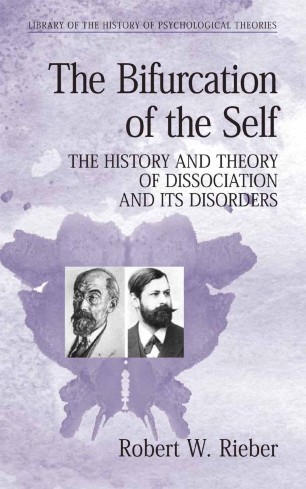 The Bifurcation of the Self

The History and Theory of Dissociation and Its Disorders

For more than a hundred years, dissociative states, sometimes referred to as multiple personality disorder, have fascinated the public as well as scientists. The precise nature of this disorder is a controversial one, dividing clinicians, theorists, and researchers. Challenging the conventional wisdom on all sides, Robert Rieber’s Bifurcation of the Self traces the clinical and social history of dissociation in a provocative examination of this widely debated phenomenon.

At the core of this history is a trio of related evolutions—hypnosis, concepts of identity, and dissociation—beginning with nineteenth-century "hysterics" and culminating in the modern boom in Dissociative Identity Disorder (DID) diagnoses and the parallel rise in childhood abuse/repressed memory cases. Rieber does not argue the non-existence of DID; rather he asserts that it is a rare disorder exaggerated by dissociation advocates and exploited by the media. In doing so, he takes on some of the most difficult questions in the field:

The book is rigorously illustrated with two centuries’ worth of famous cases including Christine Beauchamp, Ansel Bourne, Eve Black/Eve White, and most notably the woman known as "Sybil", whose story is covered in depth with newly revealed manuscripts. And Rieber reviews the current state of DID-related controversy, from the professionals who feel that the condition is underreported to those who consider it a form of malingering, so that readers may draw their own conclusions.

"Reiber attempts to locate the history of the idea of dissociative states in a social context that owes much to popular hypnotism, Freudian and pseudo-Freudian psychodynamics and concepts of identity. … On reflection, a reader is likely to feel better informed and most likely stimulated by some of the questions Reiber poses. … It asks good questions and keeps the reader asking them long after the book is laid aside." (Mark Welch, Metapsychology–online, September, 2006)

"Book seemingly addresses to psychologists and psychiatrists is Robert W. Rieber’s The Bifurcation of the Self: The History and Theory of Dissociation and its Disorders. … This book will be useful to mental health professionals looking for an overview of selected past ideas and cases of dissociation, particularly DID." (Carlos S. Alcarado, Journal of Scientific Exploration, Vol. 21 (1), 2007)