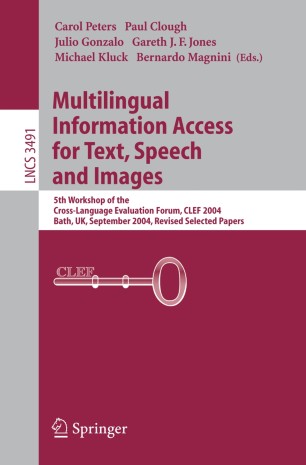 CLEF: Workshop of the Cross-Language Evaluation Forum for European Languages

The ?fth campaign of the Cross-Language Evaluation Forum (CLEF) for Eu- pean languages was held from January to September 2004. Participation in the CLEF campaigns has increased each year and CLEF 2004 was no exception: 55 groups submitted results for one or more of the di?erent tracks compared with 42 groups in the previous year. CLEF 2004 also marked a breaking point with respect to previous campaigns. The focus was no longer mainly concentrated on multilingual document retrieval as in previous years but was diversi?ed to include di?erent kinds of text retrieval across languages (e. g. , exact answers in the question-answering track) and retrieval on di?erent kinds of media (i. e. , not just plain text but collections containing image and speech as well). In ad- tion, increasing attention was given to issues that regard system usability and user satisfaction with tasks to measure the e?ectiveness of interactive systems or system components being included in both the cross-language question - swering and image retrieval tasks with the collaboration of the coordinators of the interactive track. The campaign culminated in a two-and-a-half-day workshop held in Bath, UK, 15–17 September, immediately following the 8th European Conference on Digital Libraries. The workshop was attended by nearly 100 researchers and s- tem developers.