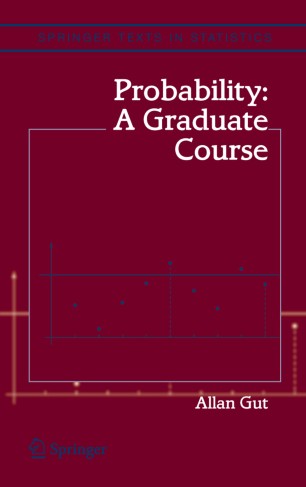 "I know it’s trivial, but I have forgotten why". This is a slightly exaggerated characterization of the unfortunate attitude of many mathematicians toward the surrounding world. The point of departure of this book is the opposite.

This textbook on the theory of probability is aimed at graduate students, with the ideology that rather than being a purely mathematical discipline, probability theory is an intimate companion of statistics. The book starts with the basic tools, and goes on to chapters on inequalities, characteristic functions, convergence, followed by the three main subjects, the law of large numbers, the central limit theorem, and the law of the iterated logarithm. After a discussion of generalizations and extensions, the book concludes with an extensive chapter on martingales.

The main feature of this book is the combination of rigor and detail. Instead of being sketchy and leaving lots of technicalities to be filled in by the reader or as easy exercises, a more solid foundation is obtained by providing more of those not so trivial matters and by integrating some of those not so simple exercises and problems into the body of text.

Some results have been given more than one proof in order to illustrate the pros and cons of different approaches. On occasion we invite the reader to minor extensions, for which the proofs reduce to minor modifications of existing ones, with the aim of creating an atmosphere of a dialogue with the reader (instead of the more typical monologue), in order to put the reader in the position to approach any other text for which a solid probabilistic foundation is necessary.

Allan Gut is a professor of Mathematical Statistics at Uppsala University, Uppsala, Sweden. He is the author of the Springer monograph Stopped Random Walks (1988) and the Springer textbook An Intermediate Course in Probability (1995). His interest in attracting a more general audience to the beautiful world of probability has been manifested in his Swedish popular science book Sant eller Sannolikt ("True or Probable"), Norstedts förlag (2002).