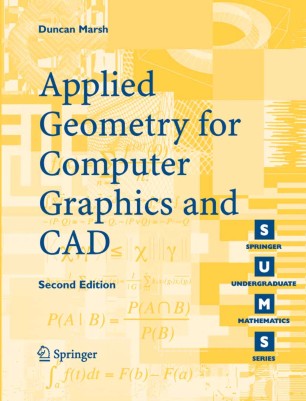 Focusing on the manipulation and representation of geometrical objects, this book explores

the application of geometry to computer graphics and computer-aided design (CAD).

An introduction to transformations of the plane and three-dimensional space describes how objects can be constructed from geometric primitives and manipulated. This leads into a treatment of projections and the method of rendering objects on a computer screen by application of the complete viewing operation. Subsequently, the emphasis is on the two principal curve and surface representations, namely, Bézier and B-spline (including NURBS).

As in the first edition, applications of the geometric theory are exemplified throughout the book, but new features in this revised and updated edition include:

the application of quaternions to computer graphics animation and orientation;

Over 300 exercises are included, some new to this edition, and many of which encourage the reader to implement the techniques and algorithms discussed through the use of a computer package with graphing and computer algebra capabilities. A dedicated website also offers further resources and links to other useful websites.

Designed for students of computer science and engineering as well as of mathematics, the book provides a foundation in the extensive applications of geometry in real world situations.

a nice introduction to the foundations of applications of geometry to computer graphics and computer-aided design….A useful textbook.

Mathematics students often ask where they can find a nice introduction to computer graphics and computer-aided design; professors have also been known to pose the same question. They will all find an answer here: Marsh’s book should guide them effectively and painlessly towards the applications of mathematics and geometry in graphics and CAD.

"This is a mathematics textbook on the basics of the geometry involved in computer graphics and computer-aided design, written at an undergraduate level suitable for students of mathematics, computer science, and engineering. … All of the book’s topics are presented in a clean and concise way, with nice illustrations and attention to both geometric ideas and practical issues of computing. … This book would be useful for instructors who want a specific reference … ." (Adam Coffman, Mathematical Reviews, 2005h)

"Images generated by a computer are ubiquitous, they are used in science, in engineering, and by the entertainment business. This textbook is an introduction to the mathematics behind these images. … This exposition is intended for a broad audience with basic mathematical knowledge (vectors, matrices, calculus)." (P. Schmitt, Monatshefte für Mathematik, Vol. 151 (4), 2007)

“The title says it all. … covers exactly what you would expect: theory and background for applying geometric techniques for visualization on a computer. … This book is part of the SUMS (Springer Undergraduate Mathematics Series). The theory and applications are explained well, and moreover the text contains numerous examples, problems, and fully worked solutions. The book was written with students in computer science, engineering as well as of mathematics in mind … .” (Pieter Audenaert, Bulletin of the Belgian Mathematical Society, 2007)