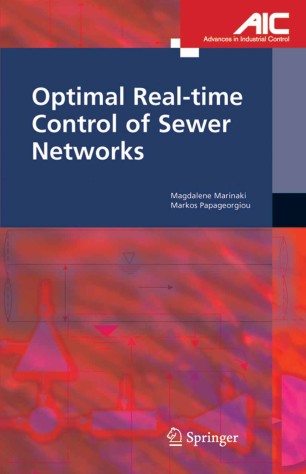 Recent years have seen a very marked increase in the desire to protect the environment from any and all malign influences. The maintenance or restoration of water quality is a vital part of that protection. A sine qua non of control system development for modern sewer networks is therefore the preservation of the water system around a network’s outflow(s). Several approaches have been proposed for the optimisation of sewage control and Optimal Real-time Control of Sewer Networks provides a comparative synthesis of a central sewer network flow control based on two of these: nonlinear-optimal and multivariable-feedback control.

In nonlinear optimal control, control and operational objectives are treated directly by the formulation of a nonlinear cost function minimized according to system constraints and the relevant state equation. The comparison presented uses the rolling horizon method for the real-time application of the optimal control algorithm with updated inflow predictions and updated initial conditions.

On the other hand, the linear multivariable feedback regulator – considered with and without feedforward terms to account for external inflows – is developed via a systematic linear-quadratic procedure including precise specifications on model structure, equations and the choice of nominal steady state and quadratic criterion.

The comprehensive testing and comparison of these protocols is undertaken on the basis of their respective control results for the real large-scale sewer network located around the river Obere Iller in Bavaria. The control strategies now implemented within this network are based on this study.

Starting at the selection of possible methods of control and moving to the actual implementation of those methods in a real sewer system, Optimal Real-time Control of Sewer Networks will be invaluable to control and civil engineers working in sewage flow and wastewater treatment and of great interest to academics wishing to see how their ideas on optimal control are likely to work out when practically applied.

She received a scholarship by the Institute of National Scholarships and the Technical Chamber of Greece in the academic year 1991-1992 for high performance in her studies. Since March 1994, she has been a Research and Teaching Associate of the Dynamic Systems and Simulation Laboratory of the Technical University of Crete. She has participated in research projects and she has assisted undergraduate courses. Since September 2000, she has been teaching at the Technological Educational Institute of Crete, Branch of Chania. Since September 2002, she has been a contract lecturer at the Technical University of Crete, Department of Production Engineering and Management. She is the author of research reports and papers in international journals and scientific conferences. Her research interests include optimal and automatic control, operations research and applications to water systems, transportation systems and further areas. She is a member of the Technical Chamber of Greece (TEE).

Dr. Papageorgiou is the author of the books Applications of Automatic Control Concepts to Traffic Flow Modeling and Control (Springer, 1983) and Optimierung (Oldenbourg, 1991; 1996), the editor of the Concise Encyclopedia of Traffic and Transportation Systems (Pergamon Press, 1991), and the author or co-author of some 230 technical papers. His research interests include automatic control and optimization theory and applications to traffic and transportation systems, water systems and further areas. He is an Associate Editor of Transportation Research-Part C, of IEEE Transactions on Intelligent Transportation Systems and a member of the IEEE Control System Society, Conference Editorial Board, and Chairman of the IFAC Technical Committee on Transportation Systems. He is a member of the Technical Chamber of Greece (TEE) and a Fellow of IEEE. He received a DAAD scholarship (1971-1976), the 1983 Eugen-Hartmann award from the Union of German Engineers (VDI), and a Fulbright Lecturing/Research Award (1997).

"The monograph deals with the optimal real-time control of combined sewer networks. … This monograph presents a self-contained comparative synthesis of a centralized sewer network flow control problem … . It is notable as the presentation of an extensive case study based on the particular sewer network. … This excellent book is primarily addressed to practitioners as well as researchers in control and civil engineering working in sewer flow and wastewater treatment industry." (Lubomír Bakule, Zentralblatt MATH, Vol. 1074, 2005)