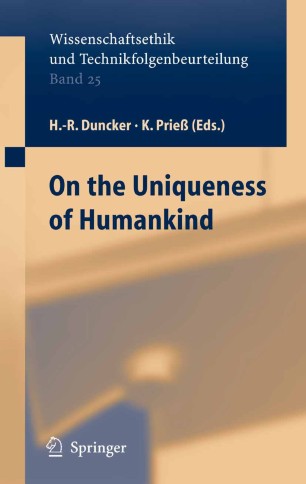 On the Uniqueness of Humankind

Biological and philosophical anthropologies of the 20th century keep emphasising the "Sonderstellung" of humans among the realm of living beings. However, it is not clear how this particular role should be characterised, how it should be reconciled with biological findings, and which theoretical and practical conclusions should be drawn from it. Partly in opposition to these anthropological view on humankind biological disciplines underline the extensive similarities and common characteristics between humans and other species. Apparently, these biological findings concur with the criticism of anthropocentrism, which is expressed in Western philosophy of nature and by ethicists.

To discuss these issues the Europäische Akademie organized the conference "The Uniqueness of Humankind – Über die Sonderstellung des Menschen". The proceedings of the conference documented in this volume approached the theoretical and practical concept of the "Sonderstellung" against the background of present day knowledge in biosciences. Furthermore, by interdisciplinary efforts, an attempt was made to clarify those conceptual problems that arise with the idea of the uniqueness of humankind.

The present volume partly takes up and develops further topics that have been raised by the volume 15 "On Human Nature" that was published in 2002 in this series.