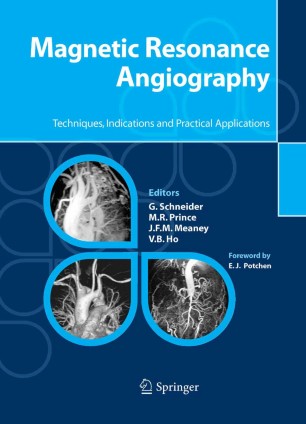 The advent of contrast-enhanced MRA in the early to mid 1990s revolutionized the clinical approach to vascular imaging: an accurate non-invasive imaging modality, not requiring ionizing radiation or potentially nephrotoxic iodinated contrast media, was able to compete with the more hazardous and invasive catheter angiography. Today, MRA is a safe, easy-to-perform procedure routinely used in most imaging centers, and the continued development of faster, more powerful magnets and more effective contrast agents is increasingly helping to overcome many of the early limitations of the technique. Subdivided into three sections (technique, indications and practical applications) and written by internationally renowned experts in the field, this volume stands out in the current literature on MRA by providing:

- detailed information on sequence parameters for different magnets and vascular territories for the optimization of the MRA technique;

- a broad overview of the principal indications for which contrast-enhanced MR angiography is ideally suited;

- the appropriateness of contrast-enhanced MRA as compared with other modalities, such as CTA and CEUS;

- the potential pitfalls and limitations of the technique in clinical routine.

The volume will prove invaluable to radiologists and clinicians wishing to expand, improve, or consolidate their routine approach to vascular MR imaging.

"The latest book available covering the evolving sub-speciality of magnetic resonance angiography.Practitioners...will refer to this textbook again and again. A very attractive feature of this textbook is the utilisation of simple block diagrams to display anatomical and congenital variations. These are done with great clarity and are extremely useful in many instances. Overall, however, I believe this to be an excellent textbook which covers the whole field of MR angiography in an extremely worthwhile manner with multiple images of superb quality. I think this book has set the standard for textbooks on magnetic resonance angiography for the years to come." (RAD Magazine, September, 2005)

"It is a comprehensive book, which has been written for professionals referring the patients as well as for those (radiologists and technicians) who take care of them at the MR suite. … This book is recommended to radiologists in training and to experienced radiologists and technicians involved in magnetic resonance. Nonradiologists professionals can find very valuable information in this book which provides an excellent approach of MR indications and limitations." (M. Chaker and J.-N. Dacher, Surgical and Radiologic Anatomy, Vol. 27 (6), 2005)