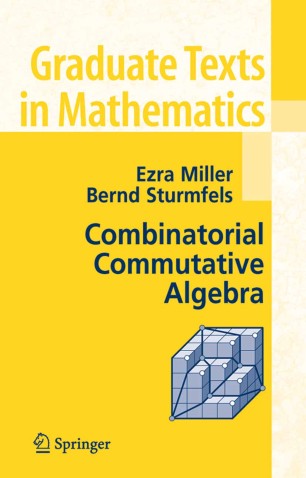 Combinatorial commutative algebra is an active area of research with thriving connections to other fields of pure and applied mathematics. This book provides a self-contained introduction to the subject, with an emphasis on combinatorial techniques for multigraded polynomial rings, semigroup algebras, and determinantal rings. The eighteen chapters cover a broad spectrum of topics, ranging from homological invariants of monomial ideals and their polyhedral resolutions, to hands-on tools for studying algebraic varieties with group actions, such as toric varieties, flag varieties, quiver loci, and Hilbert schemes. Over 100 figures, 250 exercises, and pointers to the literature make this book appealing to both graduate students and researchers.

Ezra Miller received his doctorate in 2000 from UC Berkeley. After two years at MIT in Cambridge and one year at MSRI in Berkeley, he is currently Assistant Professor at the University of Minnesota, Twin Cities. Miller was awarded an Alfred P. Sloan Dissertation Fellowship in 1999 and an NSF Postdoctoral Fellowship in 2000. Besides his mathematical interests, which include combinatorics, algebraic geometry, homological algebra, and polyhedral geometry, Miller is fond of music theory and composition, molecular biology, and ultimate frisbee.

Bernd Sturmfels received doctoral degrees in 1987 from the University of Washington, Seattle and TU Darmstadt, Germany. After two postdoc years at the IMA in Minneapolis and RISC-Linz in Austria, he taught at Cornell University before joining UC Berkeley in 1995, where he is now Professor of Mathematics and Computer Science. A leading experimentalist among mathematicians, Sturmfels has authored seven books and over 130 research articles in the areas of combinatorics, algebraic geometry, symbolic computation, and their applications, and he has mentored 16 doctoral students.

"The book under review constitutes a self-contained introduction to the use of combinatorial methods in commutative algebra. … Concrete calculations and examples are used to introduce and develop concepts. Numerous exercises provide the opportunity to work through the material and end of chapter notes comment on the history and development of the subject. The authors have provided us with a useful reference and an effective text book." (R. J. Shank, Zentralblatt MATH, Vol. 1090 (16), 2006)