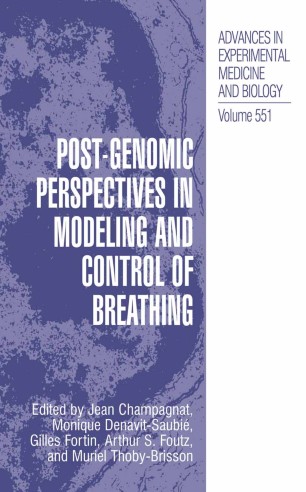 Post-Genomic Perspectives in Modeling and Control of Breathing

Part of the Advances in Experimental Medicine and Biology book series (AEMB, volume 551)

Post Genomic Perspectives in Modeling and Control of Breathing is comprised of the proceedings of the IXth Oxford Conference on Modeling and Control of Breathing, held September 13-16, 2003 in Paris, France. This publication is placed within the general framework of post-genomic neurobiology, pathology, and the precise example of the rhythmic respiratory neural assembly being used to understand how genetic networks have been selected and conserved in the vertebrate brain. Specific topics include: ion channels and synapses responsible for respiratory rhythmogenesis and plasticity; pre- and post-natal development of the respiratory rhythm; chemosensory transduction and chemo-afferent signalling. These valuable insights open new avenues as to why the genetic codes underlying a vital function such as breathing have been selected, conserved, or optimized during evolution – a major issue of post-genomic biology. This critical issue will be considered from both top-down and bottom-up integrative modeling standpoints, with a view to elucidating the functional genomics linking discrete molecules to the integrated system that regulates breathing.